The best thing about getting married in Spain in the winter is that you are nearly always guaranteed blue skies, and sometimes even a spot of sunshine. Kathryn and Paul had their hearts set on a Christmas wedding in the south of Spain on the 28th December. They loved the pretty Duquessa Marina and had romantic visions of marrying in the old Spanish castle venue nearby.

When people think of weddings in Spain they envisage either sandy beaches or pretty rustic fincas, but what many of our couples don’t realise is that there is also a huge array of historic sites and castles that are available as wedding venues.

Kathryn and Paul met Scott in both our London office and in Spain several times before the wedding. Our couples love the fact that we are able to see them in their own country as well as in the country that their wedding will take place in. This not only keeps their expenses down but it means that they have us close at hand to run through every detail.

We set about researching their dream castle wedding in Spain and discovered some fascinating facts about the Duquesa castle. The castle was originally built on old Roman foundations, there are in fact many old Roman ruins to be found on the Spanish southern coast. Its position commands a fantastic view of the sea, which is why in 1767 the Spanish king had it built there to defend the area from continual pirate invasions. Luckily for us the Spanish coast is now free from scary pirates, but the castle remains a romantic venue with great views – so we all agreed it would be a spectacular setting for their special day and permission was granted by the Town Hall to make their dream a reality.

The wedding day arrived and everything went to plan. The couple enjoyed a relaxed ceremony accompanied by a Spanish guitarist. Afterwards guests enjoyed tapas and drinks close by before making their way to a restaurant in the marina where a spectacular Spanish extravaganza awaited them.

Guests were wowed by our impressive flamenco dancer and enjoyed a sherry pouring demonstration and a few tipples before feasting on typical Spanish food. Even the kids were amused, along with a few grown-ups too, with our fun children’s entertainers who ensured that the adults could chill out and relax while the children played. 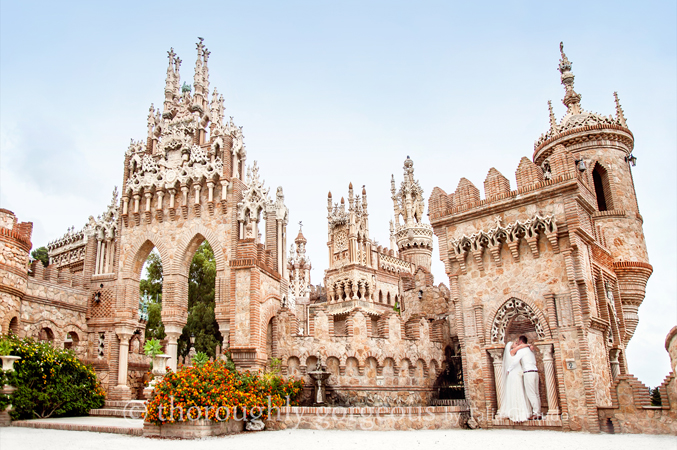 Unlike any other December wedding in the UK, our Spanish celebrations were full of history, charm, sea views, blue skies, amazing food, fun entertainment and were finished off with a night of dancing to one of our much loved DJs.

As far as Christmas parties go, this one was certainly one to remember!