One of the growing areas for weddings, as we move into this brand new decade, is children’s entertainment. And with good reason: Happy children make for happy adults!

Today we are excited to feature a very unique artist to our southern Spain portfolio, here at Sunshine Weddings. So without further ado, it’s over to you, Pom Pom:

“I have been entertaining children on the Costa Del Sol, as Pom Pom the Clown, for over twenty years, and have loved every moment of it. However, I first played and created Pom Pom two years after joining The Polka Theatre Company in 1971 straight from Drama school. The company, based in Chelsea, London and now in Wimbledon was considered to be the creme de la creme of children’s theatre companies, presenting wonderful plays featuring live actors, hand puppets, rod puppets, and song, dance and mime. We toured schools and theatres extensively throughout the UK and regularly played in London theatres such as The Arts Theatre and Hampstead Theatre Club.” 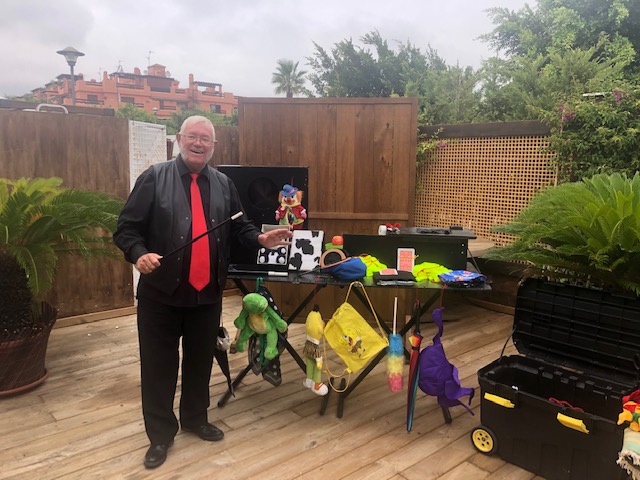 “After completing my first year with the company, as a professional? actor, the director wrote a play featuring? me as Pom Pom The Clown, in which I had to perform a number of? magic tricks. That’s how PomPom came to life.

When I left Polka I embarked on my teaching career but still continued to perform, write and direct plays in England, India and Spain. Then in 1990 I joined the staff at Calpe College in San Pedro de Alcantara on the Costa and taught English and Drama to International? students.

During my early years in Spain, however, I realised that there was a need for a children’s entertainer dressed as a clown; someone who could do magic tricks… so I re-invented Pom Pom the Clown, put together a colourful magic show… and the rest is history, so they say.

Having entertained 1000’s of children from Nerja to Gibraltar, and having met many famous and not-so-famous parents, one of the coast’s wedding planners approached me and asked me if I would be willing to entertain a? small group of children at a wedding while the bride and groom got married.

I immediately said ‘yes’ and another exciting chapter in the life of Pom Pom the Clown opened up!” 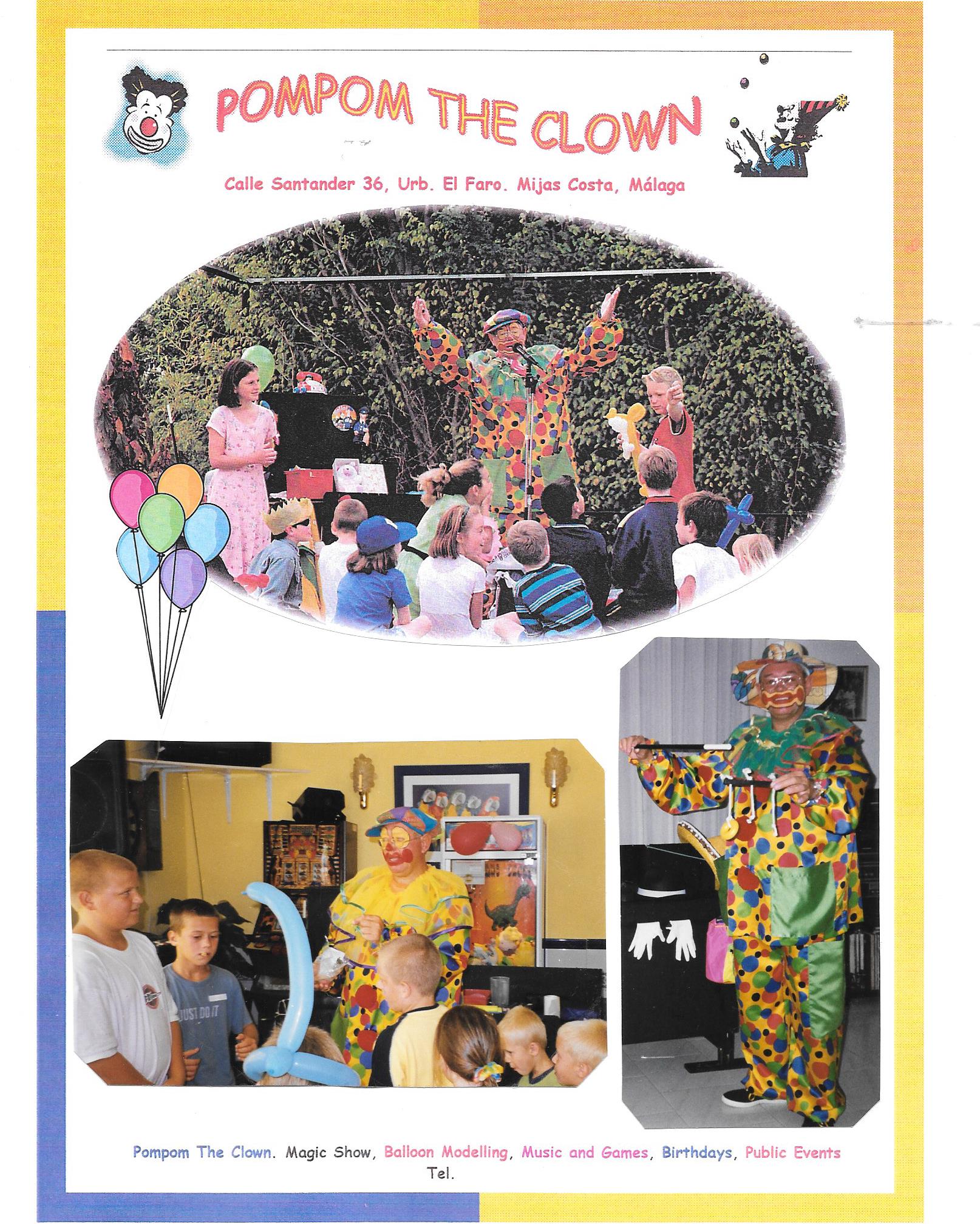 “I love doing the weddings because the whole ceremony is far more intimate than a normal children’s party, and, as we all know, a wedding is a very, very special occasion, not only for the bride and groom, but for the guests as well. Knowing that their children are being well looked after and entertained by a professional entertainer gives them peace of mind and allows them to relax and let their hair down, so to speak.

When I present a Pom Pom party? I try to be as professional as I can, and I try to make the party even more special? for the child than it already is. I love to display all my magic tricks and colourful props on my magic table so that when the guests arrive they are bowled over by the presentation. I have three specially made clown suits;? a Wizzy Wizard Halloween costume and a smart magician’s outfit.

With regards my clown make-up, when I first started entertaining? as PomPom it consisted of a yellow base, red lips and nose and black liner but with the Spanish heat the colours literally melted into each other! So I invented a simple red nose, red rosy cheeks and red lips whch I still apply today.

At a typical PomPom party the children have lots of fun from the moment the party starts by taking part in traditional party games such as pass the parcel, musical statues, musical islands, and dog and bone. I have my own sound system and a selection of recorded music, and I also provide equipment for egg and spoon races and sack races. All the children receive token party gifts and I also make them balloon animals, butterflies, hats, swords and? flowers as well. This is followed by my super magic show which is very colourful and designed to allow lots of children to participate in it… and some parents as well!

Talking of parents, on the Costa del Sol, I have nothing but admiration for them! They make every effort to make sure their child’s party is as unique and as special as it possibly can be and I salute them all.” 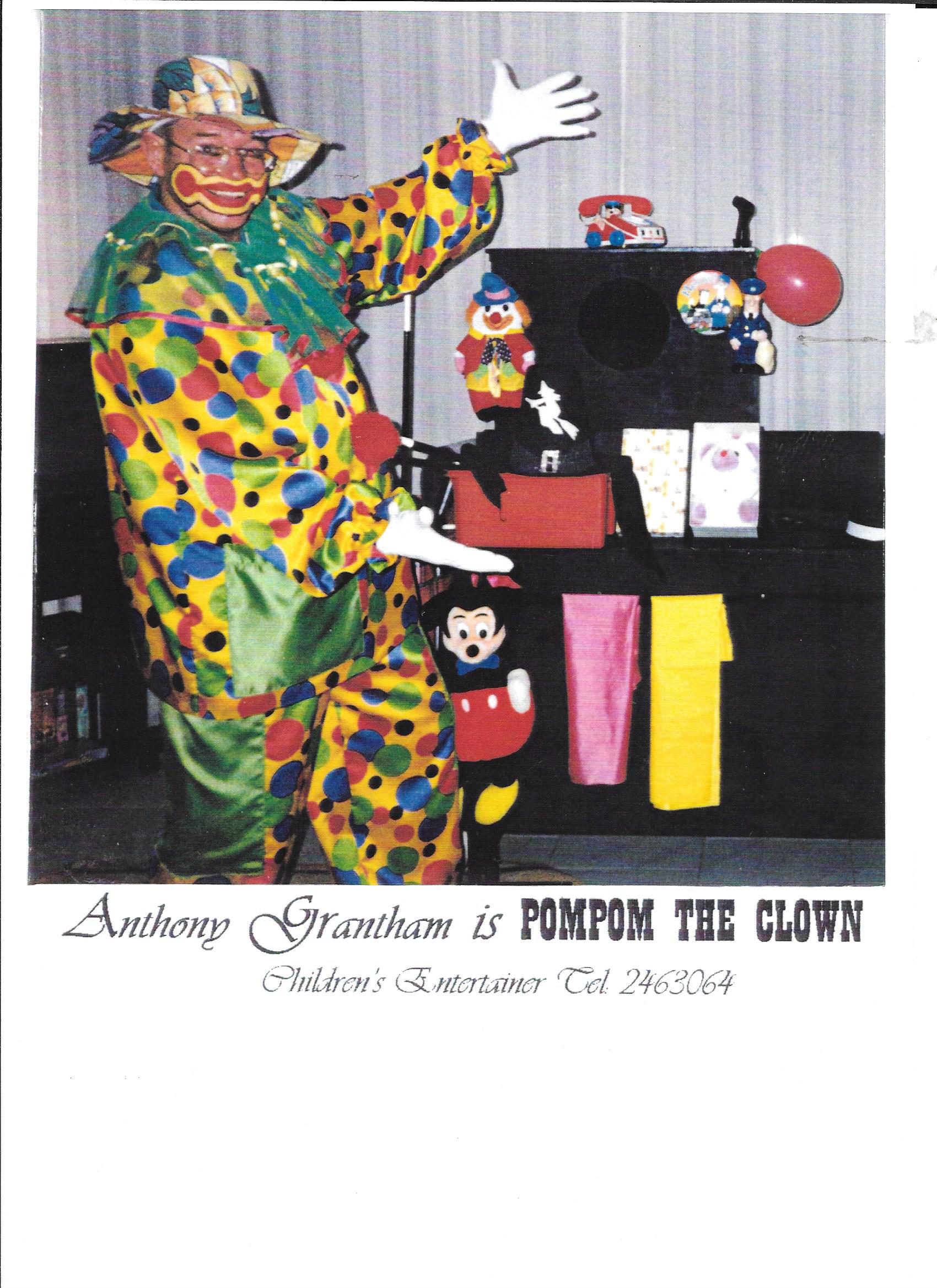 “As you can imagine, in this profession I have often found myself in some interesting situations; for example one time I provided the entertainment for an Arab prince’s son in Puerto Banus… surrounded by seven armed bodyguards! On another occasion I ended up entertaining guests at a wedding for hours on end because the bride had broken her leg during the ceremony!

One special memory I have is meeting Rick Parfitt of Status Quo at a wedding in Finca la Concepcion. Over the last few years I have had the pleasure of entertaining Rick’s children at both their own and other children’s birthday parties, but had never met Rick who was always away touring with Status Quo. So after our first meeting, I met Rick a few weeks later at a party and he sat on the grass with all the other children and proceeded to try and guess how the magic worked… of course I refused to tell him. We ended up having a glass of wine and showing each other card tricks and talking about his life with Status Quo. Imagine how I felt sitting in the warm Spanish? sunshine chatting to one of my rock heroes! For me a priceless experience.

Apart from entertaining children as Pom Pom the Clown, or Pom Pom the Magician, and supporting a number of charitable events I can also be found performing regularly at The Salon Varieties Theatre, Fuengirola in musicals and plays. And at Christmas time I put on my Santa Claus suit and distribute presents to excited children at venues up and down the coast.????

What of the future? Who knows? But what I do know is that I have a wonderful life!

And as long as I remain fit and healthy, and the parents and wedding planners still want me to entertain their children, then I will do so for as long as I can.

Aw, we raise our glasses to you, too, Pom Pom! A HUGE thank you for this wonderful bird’s eye view of your act and all that it encompasses.