Some magical days stay with you for a lifetime. Sunshine Weddings Spain most definitely experienced one of those recently when Scott received an exciting phone call from a groom who wanted to arrange an epic surprise proposal for his girlfriend… who would hopefully become his fiancée. 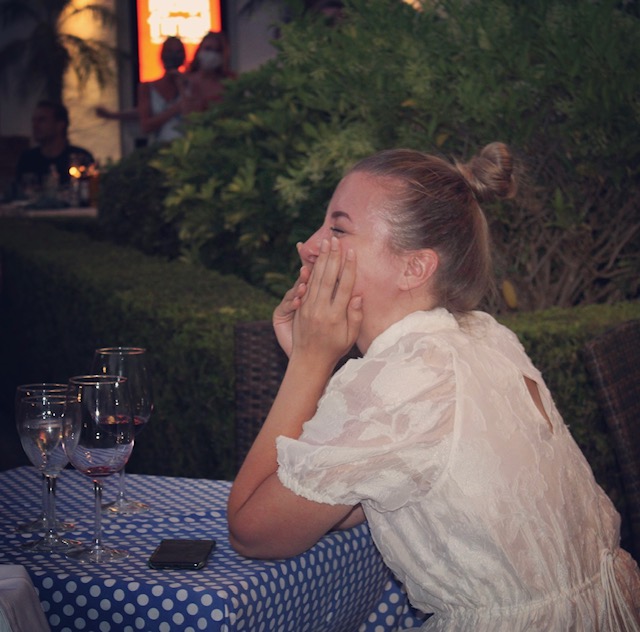 The couple were staying in the gorgeous Old Town of Marbella at the time, and, with just 48 hours notice, Sunshine Weddings Spain’s Scott was definitely up against the clock to deliver all the specific requirements to help pull off a seamless engagement!

As the evening of the proposal arrived, the young couple were seated at a table in one of the beautiful restaurants situated in the first line of the town’s iconic and charismatic open air orange tree square, making for the ultimate picture postcard of romance. 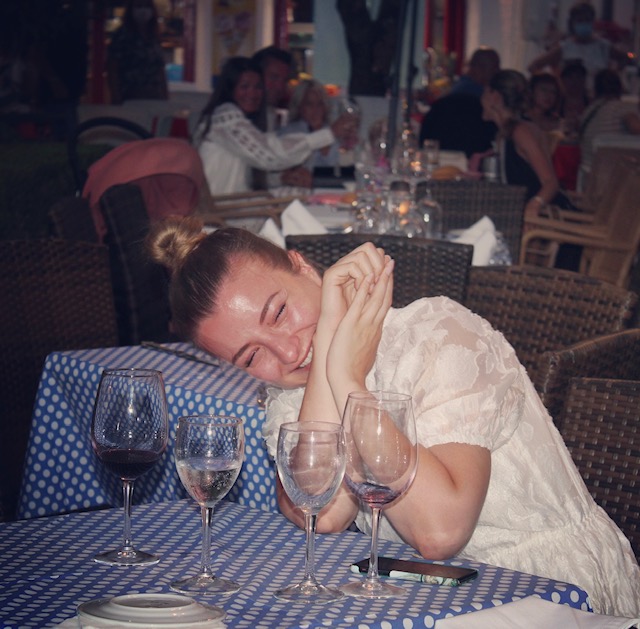 The groom-to-be left his lady at the table, making his excuses that he needed to move his car. Meanwhile, Scott was on tenterhooks, waiting by his phone all night ready for his next call to action. 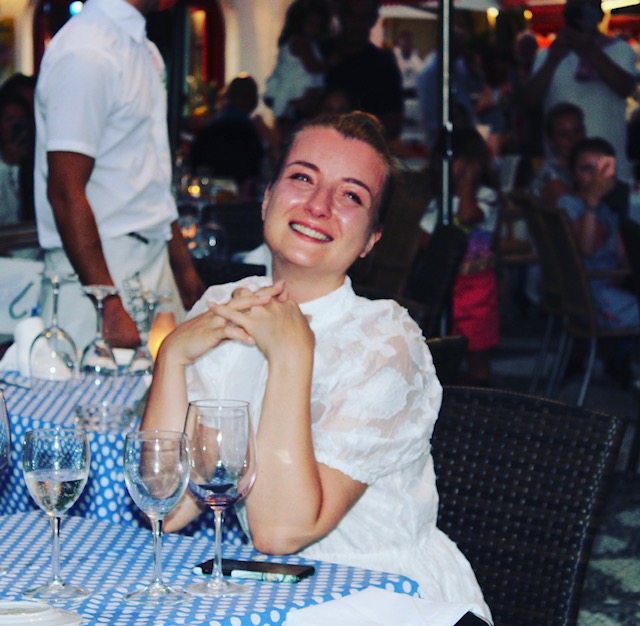 Finally the phone call came, and, with just 5-10 minutes notice the two men came up with a game plan. Oblivious to all of this, the bride-to-be continued to enjoy the wonderful atmosphere of the square as her favourite music mysteriously started to play across the airwaves on the sultry saxaphone, and the area began to fill up with tourists and locals out to enjoy the early Spanish evening. 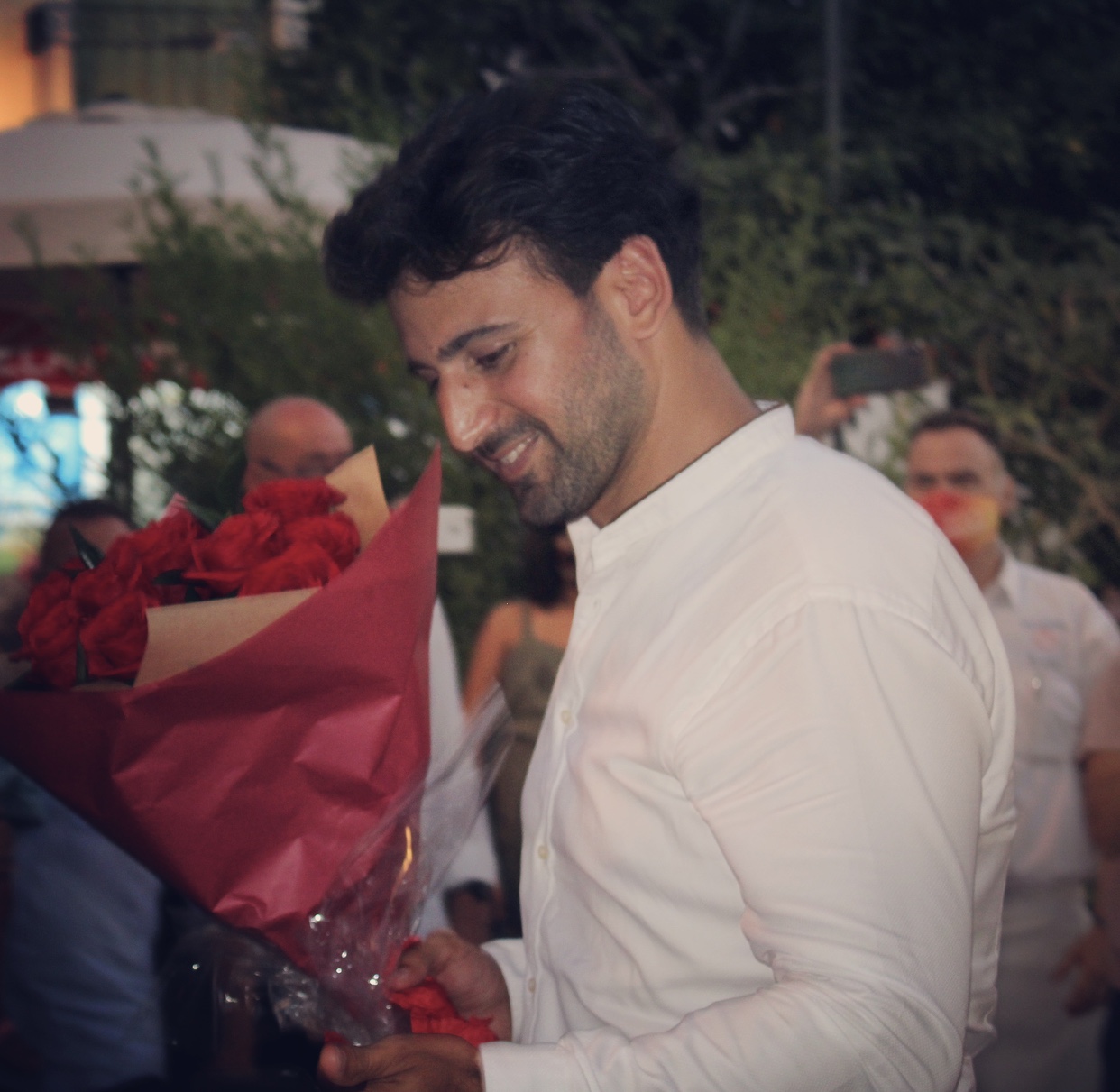 Food orders were delivered to nearby tables by the restaurant’s waiting staff (who were all in on the secret) in an impressive and complex ballet of co-ordination, so as not to interrupt the theatre of the proposal’s build-up, and the groom-to-be returned to his lady, having ‘dealt with his car’. The music stopped, the saxophonist took a break, and then came a spot of tango. The bride-to-be is a huge fan of this particular dance style, and with music from the movie ‘Take The Lead’ playing out loud, it was the perfect opportunity for the couple to re-enact the infamous Antonio Banderas scene from the production. 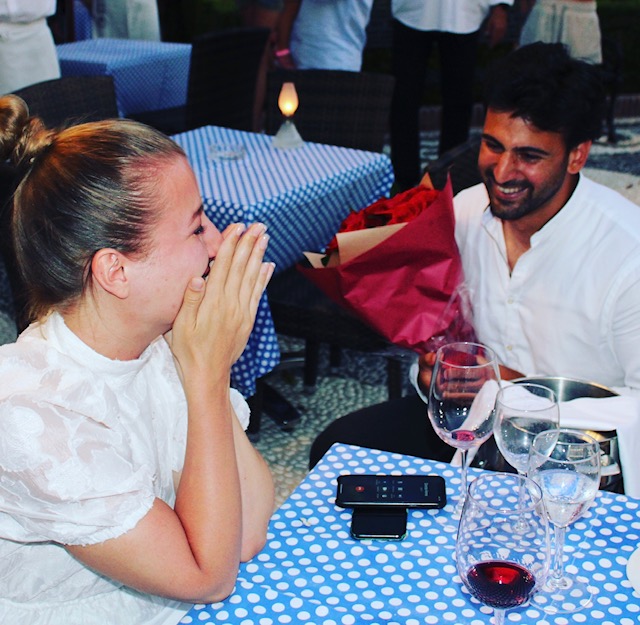 If the bride-to-be started to suspect that all of this was a little too much of a coincidence and that something was definitely afoot, she was doing a great job of hiding it! 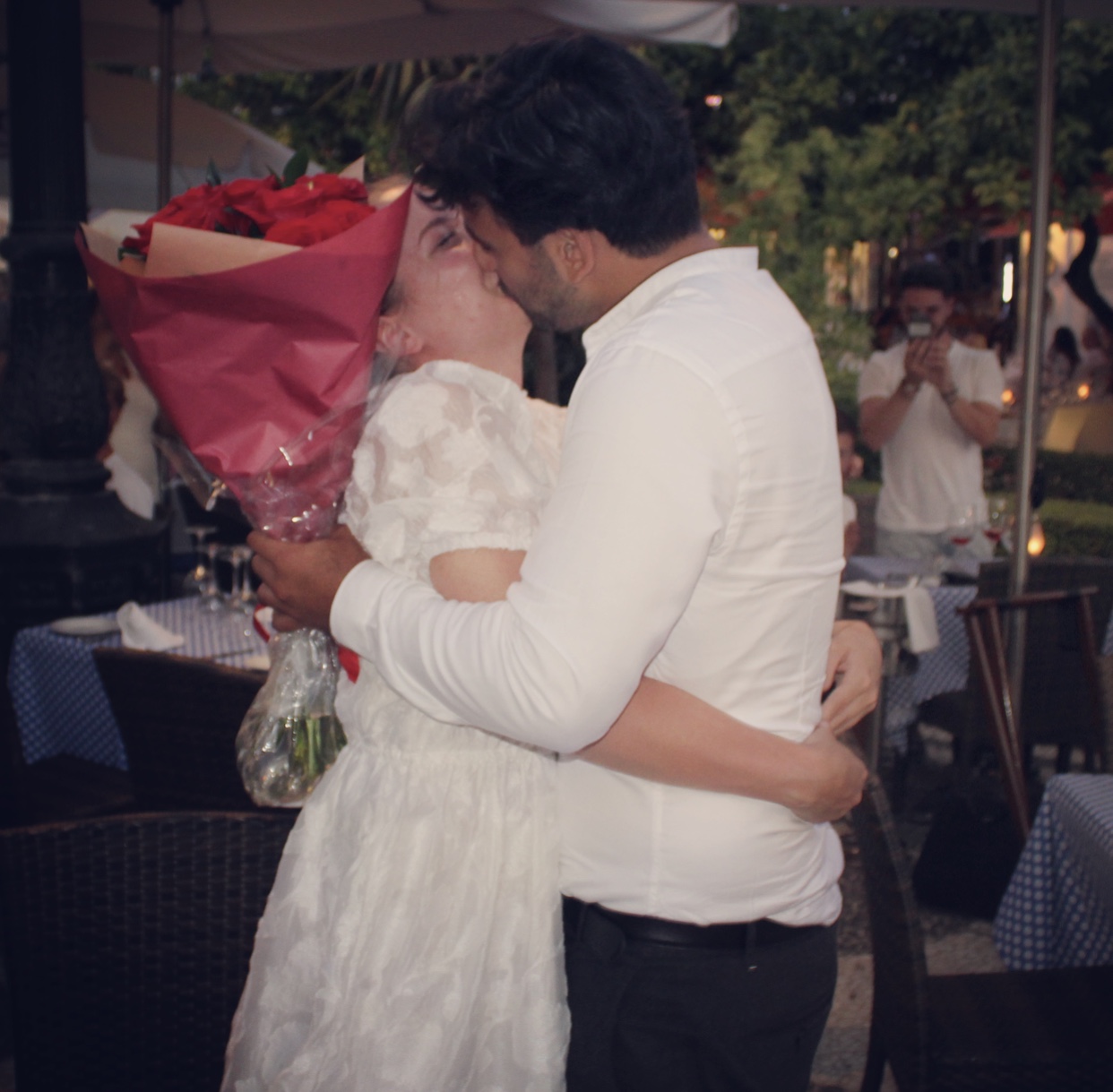 As if by magic, the saxophone started up again… and a group of flash mob dancers appeared, seemingly out of nowhere to dance to the Bruno Mars hit ‘Marry You’. 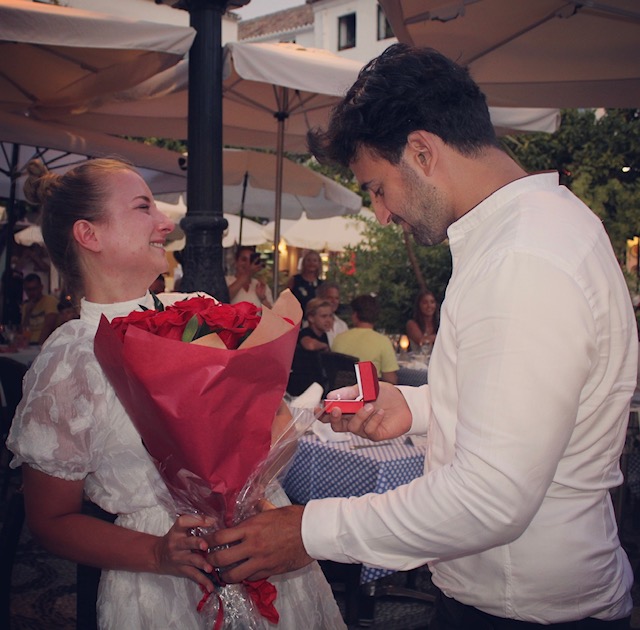 By this stage, of course, the atmosphere in the square was absolutely electric! People were watching and filming the amazing spectacle playing out before them; romance very much alive and kicking, despite the havoc the pandemic had created for everyone’s summer. 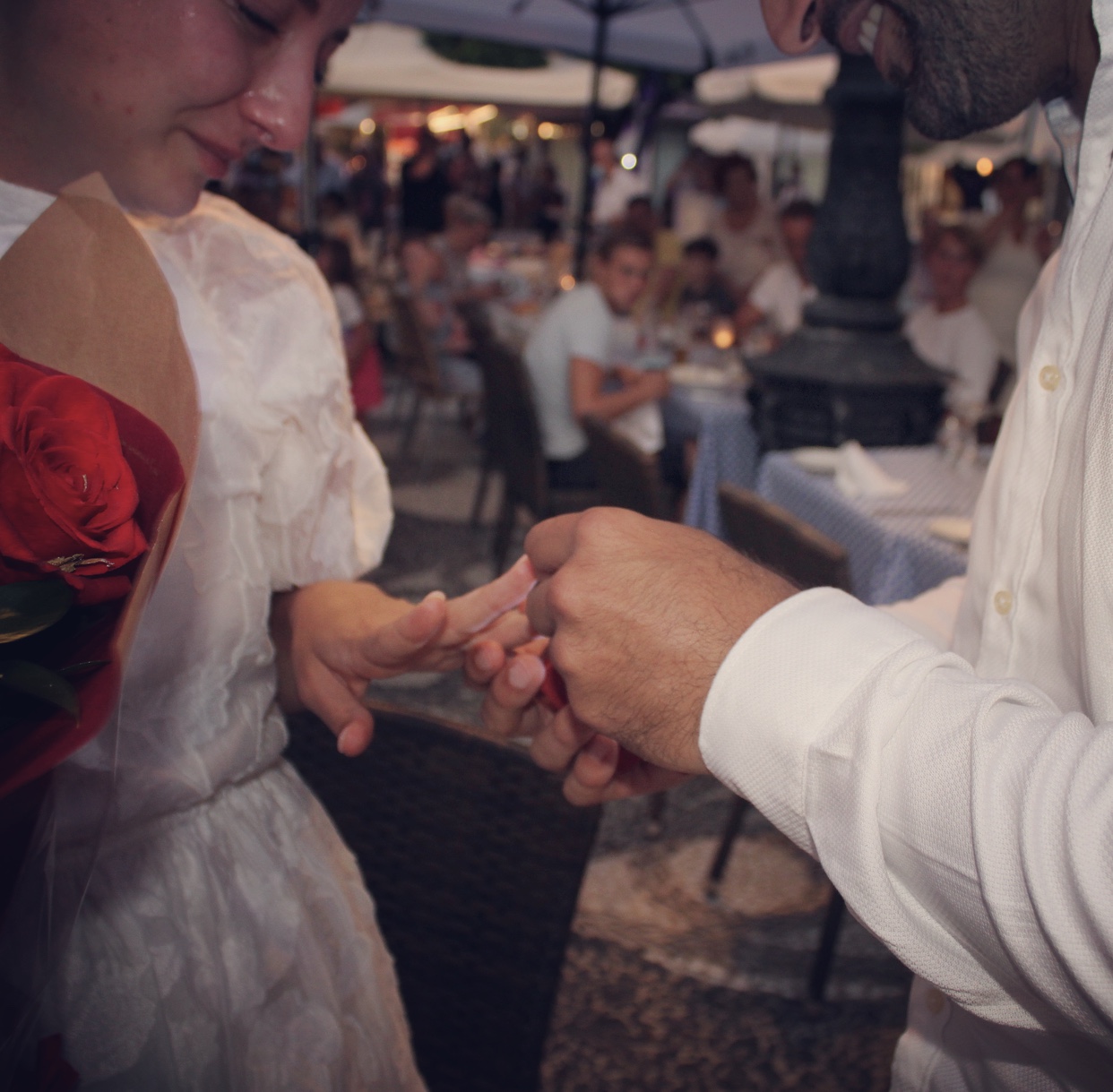 With just 30 seconds to go before the proposal (the timing and details of which had been planned in the most intricate detail), one of the dancers pulled up the groom to hand him twelve red roses. His almost fiancee started to film him with her phone… meanwhile the groom-to-be attempted to call his fiancee’s mum to ask for her hand in marriage… alas there was no answer! 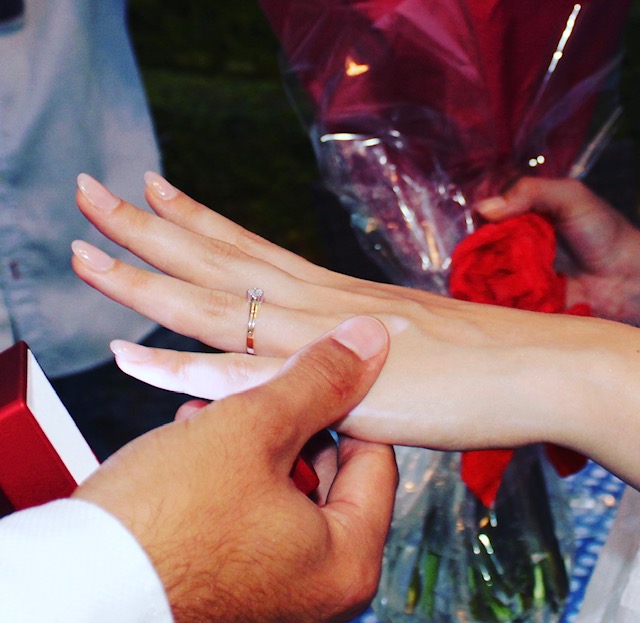 Happily he got down on one knee anyway, roses and ring in hand, to ask the love of his life if she would be his wife, to which she answered a resounding YES and all of Marbella rejoiced. 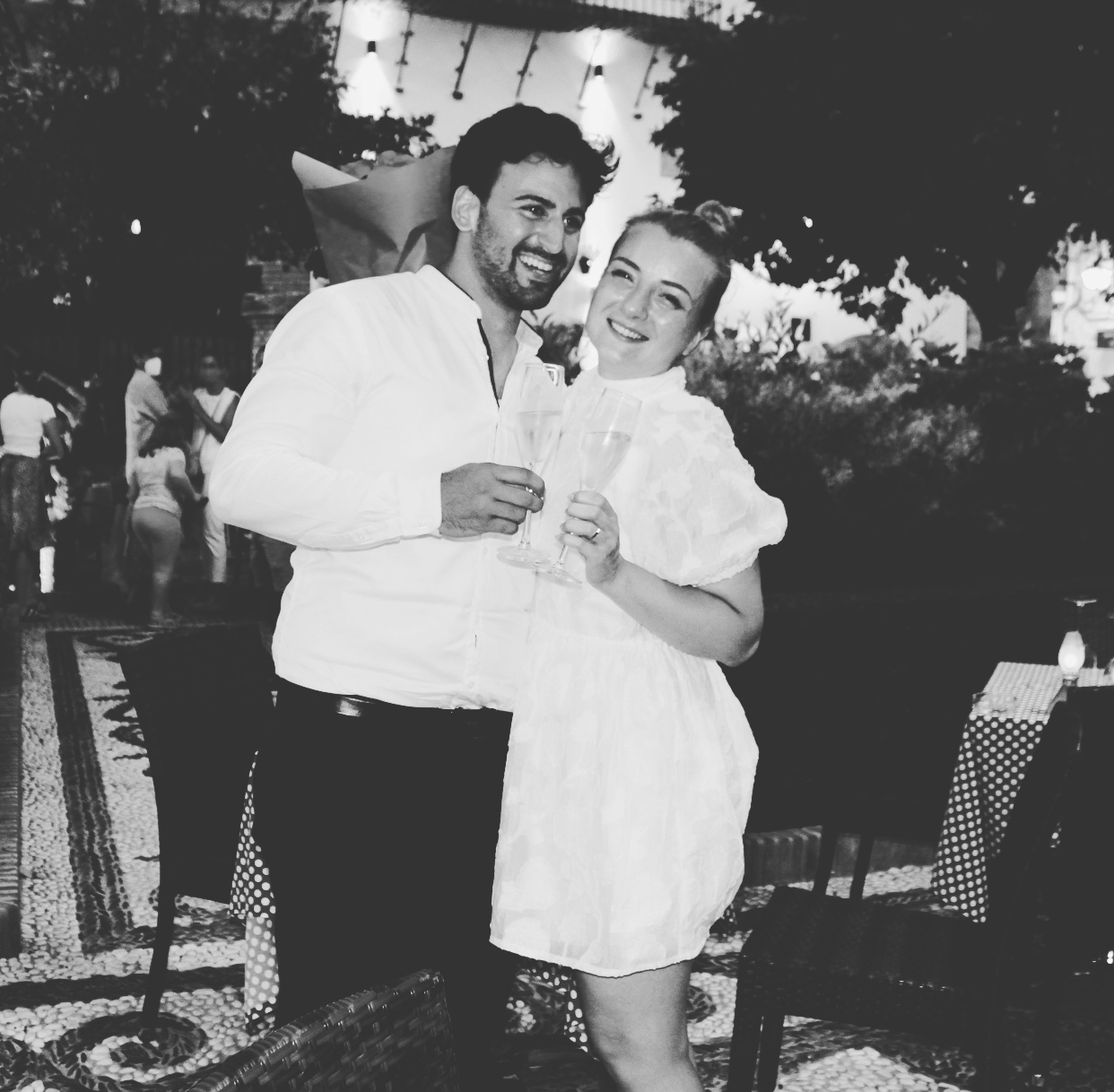 The Sunshine Weddings team presented the happy couple with two glasses of cava. What an exciting and emotional evening. We couldn’t be more thrilled for this lovely couple and wish them many years of  happiness together, as well as an epic wedding celebration in the not too distant future.