Kath and Steve enjoyed an intimate wedding renewal in Marbella by the beach. 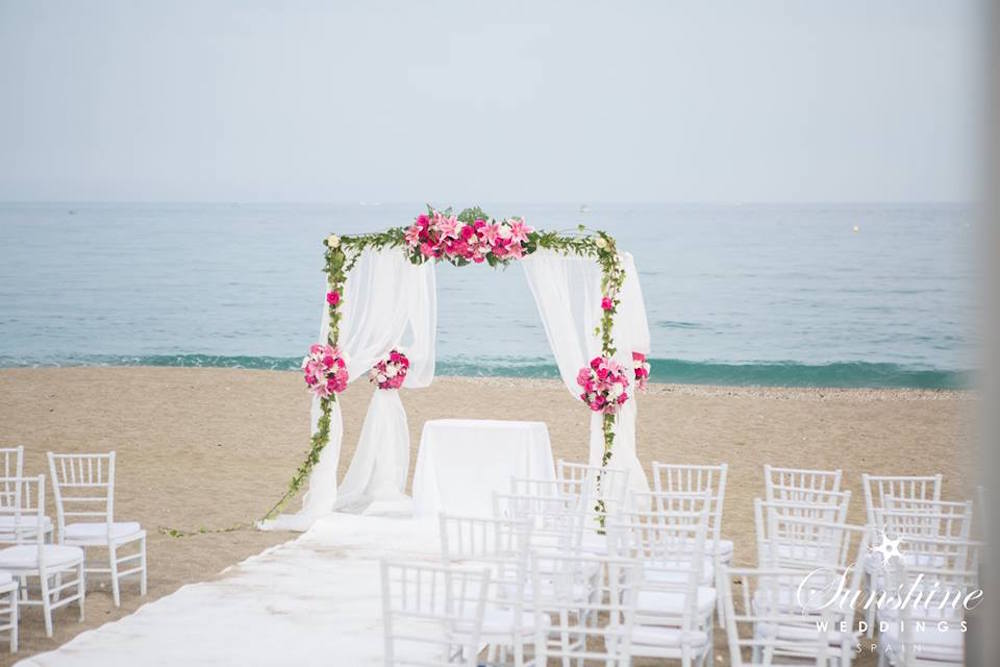 We first got married in August 2002 in Wales and nine years later were blessed with twin daughters, Daisy and Isabelle. We enjoyed many happy years together before a series of tragic circumstances drove us apart. In 2009 my Father, who was my hero, died from cancer, leaving a massive void in our family from this loss. Mum and Dad had been together since they were 16 years old and were soul mates. Because of this family void I decided to start a family and became pregnant with the twins. Tragically, six months after my dad died, my sister, who was my only sibling, was diagnosed with cancer. She managed to fight for a short time and witnessed the twins’ birth but sadly she passed away a year later, leaving four sons behind.

The dark times continued with my nan dying a few months after my sister and the financial recession in the UK hitting the property market hard, which affected Steve’s biggest company. I felt that I could not cope in the marriage anymore, with Steve working long hours while I was grieving so badly for my losses and trying to care for young twins. I filed for divorce and we became stuck in a legal battle for the next four years eventually we were given a court date in March 2017 to finalise matters.

In December 2016 Steve asked whether I would bring the twins for a skiing holiday to Val d’Isere, to which I reluctantly agreed. Steve and I got on so well that, when we returned home, neither of us could get this out of our minds. We both agreed to give the marriage another go, Steve moved back in with us and things have been great ever since. We are both very happy and feel it was definitely the right decision – we are now a complete family and the kids are so happy to have their daddy back!

So, we decided to show each other, the children, family and friends that we are truly reunited and celebrate this with the wedding renewal on our wedding anniversary (the 25th of August). We originally married in the UK, so wanted to do something different for the renewal. Also, we wanted the occasion to be a smaller affair with close friends and family who had stuck by us through the difficult times. 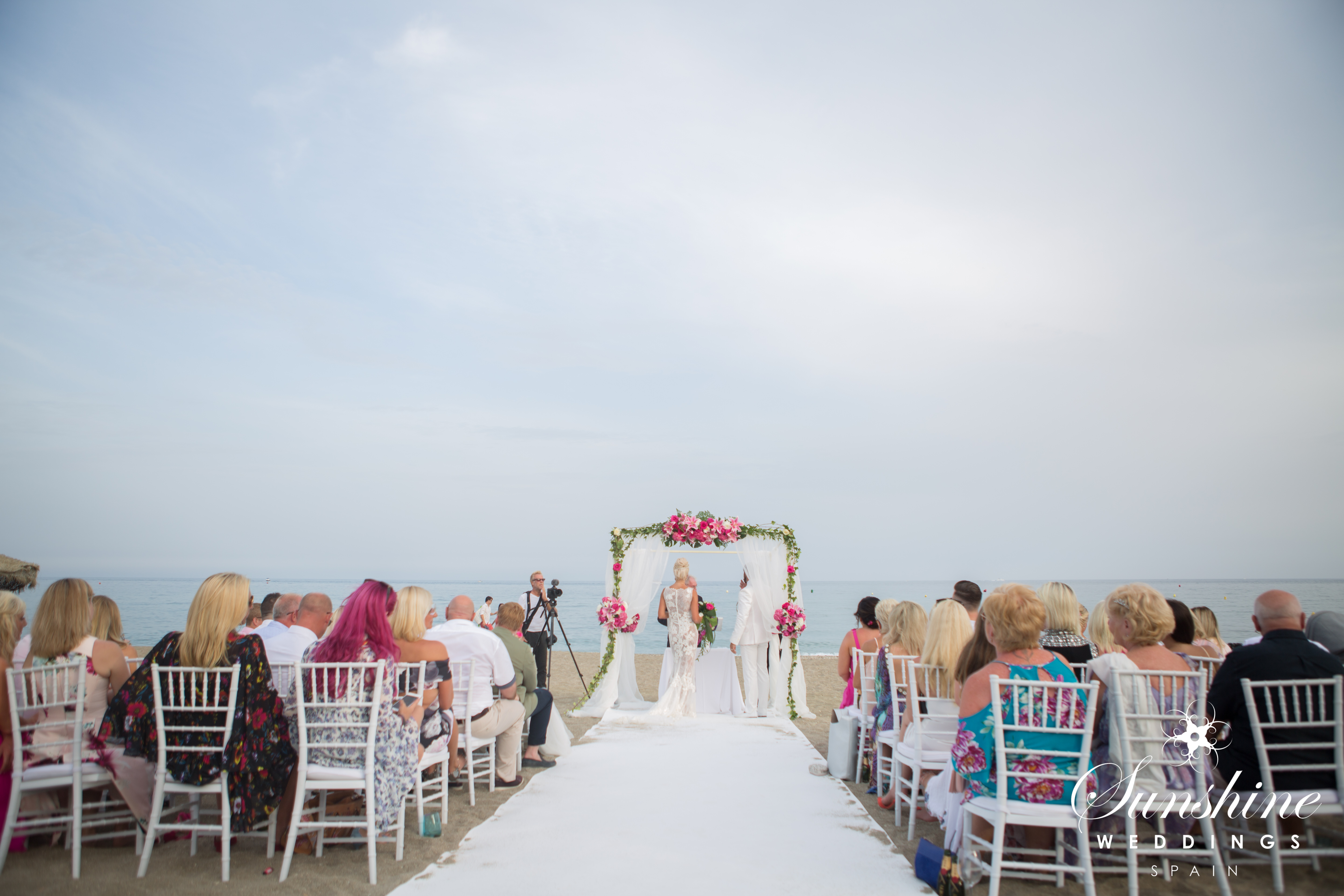 We decided, while on holiday in Marbella in March 2017, that we wanted to have a wedding renewal here, which only gave us five months to plan, organise, deliver and invite guests to a wedding abroad. It was a lot to’do and we needed a little help.

I had met Scott Gibbons from Sunshine Weddings at another wedding he had organised, so I contacted him, explaining the type of venue I was looking for, We decided on La Milla, a luxury chiringuito location on the Golden Mile and Scott got to work organising my specific fit-out for the venue, including hired furniture, guest seats for
the beach, white LED dance floor, fairy lights in abundance and a gazebo covered in flowers for the ceremony, with white carpet on sand. Scott Gibbons and his team were outstanding and they delivered way beyond my highest expectations.

I purchased my dress from London but it was designed and made in Barcelona. I changed – at 2am – into a white lace and sequin all-in-one with tassels ready for clubbing at Suite, as my dress had a train so otherwise I would have been unable to dance properly! Karen, the florist from Deseos, did an outstanding job with the flowers. She decorated the venue, the gazebo and even sourced my guest favours, which were His & Her bride and groom flip-flops with our names on the tags. I can’t thank her enough. I didn’t like my flowers at my original UK wedding in 2002 and wish Karen had done them instead.

I wanted a fun and light-hearted wedding renewal, more like just one big party. I had organised for the celebration to continue after this Marbella beach venue’ had closed at 2am at Suite in Puente Romano and we all got home at 4am.

The owner of the beach venue, Carlos, his manager Andreas and the team were also outstanding and I can’t thank them enough. The venue, the service, the food and the staff were so attentive and friendly. I just want to do it every year and my guests have requested that I do, as they said it’s the best wedding they have been to.

The entrance drink was as per our original wedding. On arrival guests were handed mini bottles of Moët champagne with a black straw. I insisted that no alternatives were to be offered as I wanted the champagne to kick in immediately, to create the happy party theme.

I only drink Pimms and lemonade, so Carlos and Andreas made sure they were stocked up and Andreas ensured that my glass was always topped up, which made this bride very happy! They were brilliant, so attentive to me. Andreas even helped me change into my evening outfit, ready for clubbing at Suite. 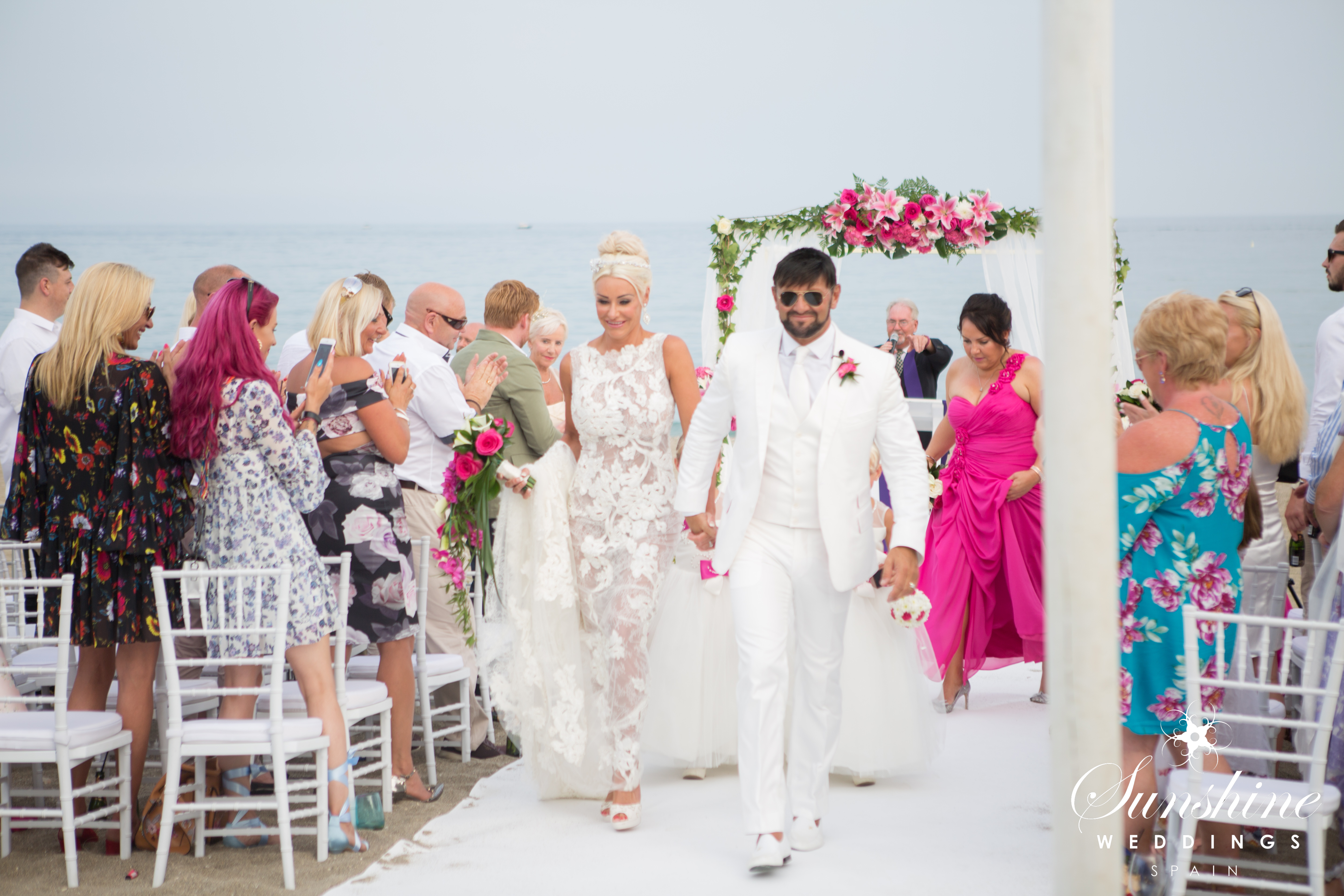 We flew over two friends who are amazing singers: Gavin Sheppard is by day an estate agent and by night a singer. Our female singer, 23 year-old Rhio Jones, was totally outstanding, and she blew everyone away with her vocals.

I walked down the aisle to Rhio singing Celine Dion’s song ‘It’s All Coming Back to Me Now’ – very apt considering our circumstances. The public on the beach all stopped to watch and clap, which was lovely. After the beach ceremony, Rhio and Gavin performed a duet of a song by Labyrinth, ‘Beneath Your Beautiful’. 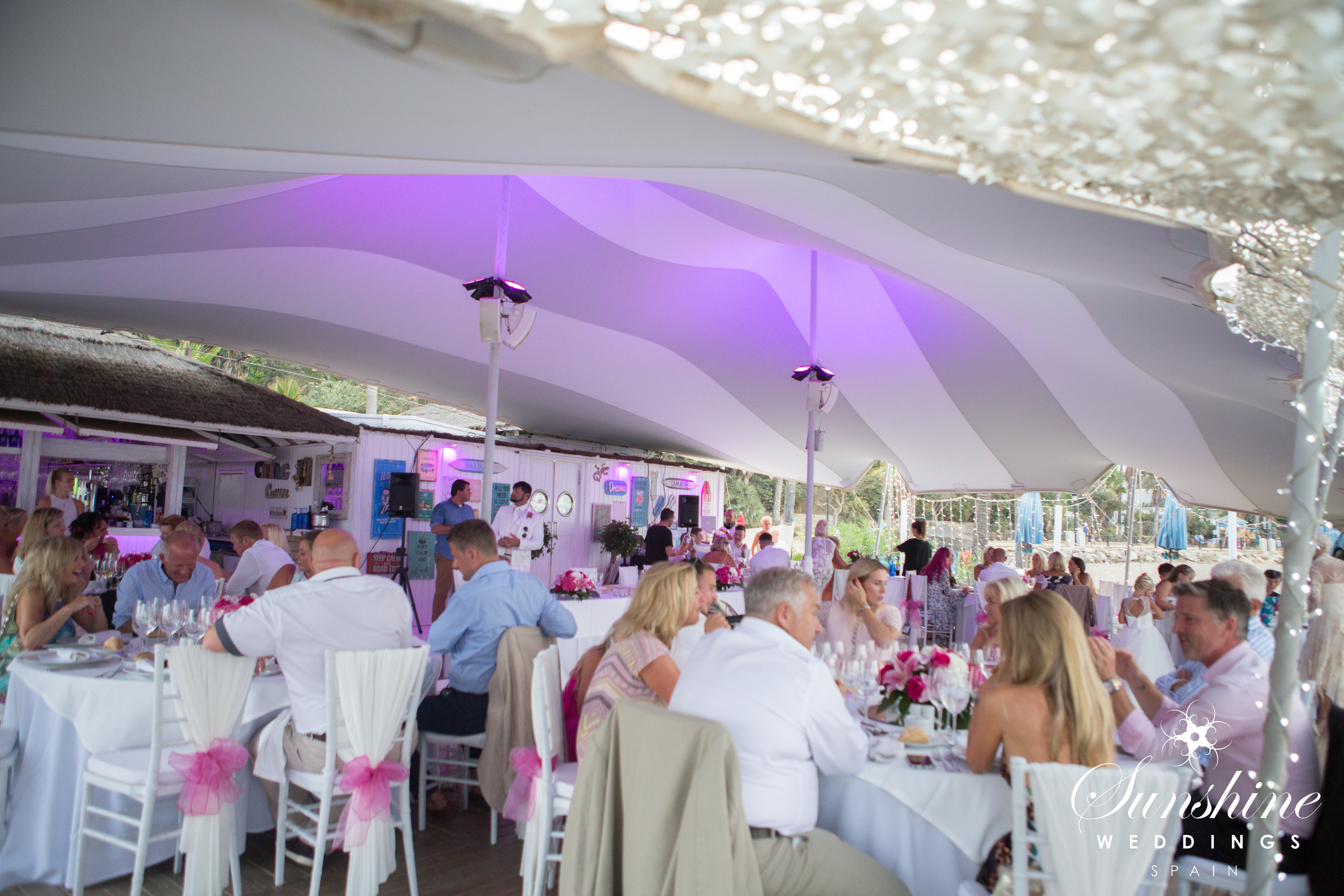 I brought along a film clapperboard and wrote on it as a joke “Scene 1 Take 2”, meaning it’s our second time getting married. You know what they say – second time lucky!